Just realized that it was Monday and time for another Meatless Monday recipe. 🙂

I have decided to reblog the most delicious broccoli and cheese soup recipe ever.

Celiac Kiddo is written by Dana who has on of the best blogs out there, always entertaining and she has most delicious recipes.

Check out this super yummy soup and Danas incredible blog. 🙂

Simba, Sim’s, Big Brown dog, Lovey she goes by many names.
We first met Simba about 5 years ago, she was a very different dog then.
She was the skinniest thing I’d ever seen with beautiful shiny fur and the most beautiful brown eyes.
She was taken from her “home” I use that term loosely from our local Humane Society.
The people who were supposed to be caring for her chose to leave her tied up outside and thought also that maybe she didn’t need food and water to survive, not to mention the love she deserved.

When they first brought her into the shelter, she would only crawl across the floor if that, she was terrified to move and would cower when anyone came near her. We spoke with the woman who had gone to rescue  from her hell and she felt at that time that she may not be “adoptable”. She was 4 when she was rescued and being fed puppy food, so that she could gain her weight back gradually and not upset her system.
I truly believe that the penalties for animal abuse should be tougher in this country and others. Fining someone or taking their animals from them is not enough.

When we first met her it was during the winter, she had been at the shelter for quite some time, the staff at the shelter had taken a lot of time with her as they do the other animals they care for, but she was their “special needs” dog. When we arrived at the shelter to meet her they let her out of her enclosure and she just started running as fast as she could running circles around us rolling in the snow, she was out of control, in the process she knocked my older daughter Meghan who at the time was 8, down to the ground and stood over her gave some kisses and then took off running again. Many people would have decided then that this was not the dog for them. But not us!
We filled out all the necessary paper work and waited. We finally got the phone call that we could “foster” her, well this was better than nothing…we brought her home.

She followed me around for the first few days, literally on my heels, kept pushing her nose between my legs from behind, I was getting a little annoyed by day 5 of this…she still follows me everywhere I go without the nose 🙂 and thinking back now we should have renamed her Shadow…

She would pee as soon as we came in the house, or if anything distressed her, we had weekly visits from the woman who runs the shelter to see how she was doing, often unannounced.  By this point we were all so attached to her, and I prayed they’d let us keep her. Which thankfully they did. We finally adopted her 1 month later. We still had visits after that for about 2 months, all the staff at the shelter had taken a personal interest in our special girl. I still after 5 years give them updates on her life and weight. Simies is a little overweight not by much but she deserves it she and is now our full figured girl. It has been said that people soon start to resemble their animals and well I am also becoming a full figured girl, both Sims and I have added more exercise and less indulging in food as our New Years resolutions 🙂

She loves the girls and other kids as long as they are quiet, there can never be any “rough housing” when she is around, our neighbour Emily was running in the yard when Simba came up from behind her threw that nose of hers between Em’s legs and lifted her right of the ground, no one was hurt and it has become a long-standing joke at our house, the day that Emily was rhinoed by Simba, that being said Emily still never runs when Simba is around. She is part Border Collie and German Sheppard, she has a very protective instinct and loves to herd the kids. Often when the girls are playing outside we need to keep the big dog inside. 🙂 For myself I never fear for my safety when she’s around. Don’t get me wrong I trust her completely she has been around babies and small children and even has two cats and a small dog as companions. She is a gentle soul you just don’t want to take advantage of her good nature. 🙂

It was also suggested that she be in a “one dog” family, we already had the big orange hunter Murphy which was great and they became fast friends, I then found Scamps at the shelter about a year later and could not leave him there, I  filled out all the necessary  papers again, not so many this time though and brought Scamps home that day.  They had made an exception, usually you need to fill out all the paperwork and wait a week or two until you are approved, but we’d just been through all of this with Simba and they knew us quite well.  The first couple of weeks were a bit of a trial, Scamps is a small dog with big attitude, we call him the 5 pound Rottweiler  but as with Murphy, Simba and Scamps are the best of friends and I’m not sure what one will ever do without the other, they are very similar to those cartoon dogs Spike and Chester.  Scamps running around Sims and Sims giving him a quick bark as though to say “knock it off punk” 🙂

The video below is so much like them, just makes me laugh every time I see it.

She has turned out to be the best dog and companion a person/family could ever have. I would highly recommend getting a dog/cat from a shelter, not only are you saving a life but your gaining a wonderful faithful friend and family member.

I don’t usually post photos but had to share this one, I was just outside taking photos of a group of turkeys walking through our yard and saw a cute photo op of Gordo. Gordo of course on the inside and me out. 🙂

This picture is so cool 🙂 , it caught the reflection of the backyard,me and the tinman. 🙂

And the Turkeys…there must have been at least 20 of them, could not get them all at once. 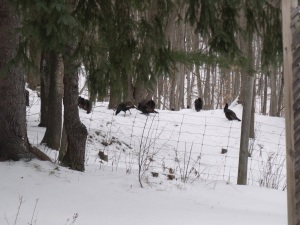 I was on Pinterest last night when I came across this idea, might be a fun new tradition to start.

If you’re a crafter this is a really great website heart-2-home.com she’s got all kinds of stuff posted including a Diaper Wreath….recipies and more.

I’ve decided to call this project , The Jar of Awesomeness 🙂

I finally found my camera today, it was in Meg’s room along with some of my other prized possessions topic for another day,  I took the memory card out plugged it into the computer and these are some of the photos the girls took this past summer.

Sims cooling off in her pool

Mama and the pest

LOVE This one very creative!!

A deaf-mute girl on a horse that she has ridden for only THREE weeks!!, not to mention the song she picked out to dedicate to her deceased father! Listen to the announcer’s voice crack! The horse she is riding is not even hers; she is training it for a client and has had it only 20 days at the time of the ride shown here. Note that she rides without a saddle or halter and bit and (obviously) without voice commands. She is using the method used by North American Indians. When you think your voice can’t be heard I want each of you to watch this Video. She has no voice. She cannot hear. Yet she has persevered and achieved! Thought you all would enjoy this…

Thank you to both of you for completing my “star board” Award.

Bailey Boat Cat is the most beautiful Siamese Cat who lives on a sailboat and shares his adventures with his two leggers. 🙂

Scanteia written by Victoria is full of beautiful poems, photography and stories.

You’ve got to check out both of these amazing blogs.  Thank you again!

I’ve been thinking it might be fun to write a Haiku Poem, I haven’t tried this in such a long time, however I did remember how fun it was and the 5-7-5 rule.

Not an easy piece to write

Okay I know lame but if you look at the guidelines for writing a Haiku poem I think I’ve nailed it , sheepish look on my face and slightly shrugging shoulders 🙂

Line one has 5 syllables. Got that too

Line two has 7 syllables. So far so good

and line three has 5 syllables. This is easy peesy.

Oh yeah I’ve got this!

Haiku is a mood poem and it doesn’t use any metaphors or similes. Hmmm I still have a little work to do…:)

50 Shades of Grey Trilogy of course.  Need I say more….