Murphy a.k.a The Murph

Cats have 32 muscles that control the outer ear, we only have 6 muscles each.

A cat can rotate its ears independently 180 degrees and can turn in the direction of sound 10 times faster than those of the best watchdog.

Cats can judge within 3 inches the precise location of a sound being made 1 yard away. A cat has a total of 24 whiskers, 4 rows of whiskers on each side.  The upper tow rows can move independently of the bottom two rows.

Cats purr at the same frequency as an idling diesel engine, about 26 cycles per second.

Cats walk on their toes.  Cats can be right-pawed or left-pawed.

Six – toed kittens are so common in Boston and surrounding areas of Massachusetts that experts consider it an established mutation.

The cat appears to be the only domestic companion animal not mentioned in the Bible.

However…..That depends on the Bible one uses.  The word “cats” does appear in the Catholic Bible.

A Catholic Bible has 73 books:  46 in the Old Testament and  7 in the New Testament,
The seven books that are in the Catholic Old Testament “the deuterocanonical books”.
Some refer to them as “apocryphal books”. One of these seven is BARUCH.
The one and only verse that refers to cats in the Catholic Bible is to be found in Baruch
It reads as follows:
“Bats and swallows alight on their bodies and on their heads; and cats as well as birds.” (Baruch 6,21)

Last Wednesday I had a procedure to remove two lovely Ganglions that are on the side of my foot ,this is the second time I’ve had them .  Well the little procedure I had last week didn’t work very well!!!

I was without my two little buddies for about 3 days!!

Over the weekend they returned with a vengeance , my foot is now more uncomfortable than ever and I’m developing a small ovalish lump on the bottom of my foot directly under the returning gangly-i .

I called the surgeons office yesterday and have an appointment next Monday we’ll discuss what the next plan of attack is.

Here is a brief description of what a I understand a Ganglion to be:

A ganglion cyst is a tumor or swelling on top of a joint or the covering of a tendon .

They are also known as Bible cysts. Some folks still do this, they just grab a large book such as The Bible and whap!  Good night nurse!

The cause of ganglion cysts is not yet known. Some suggestions are that trauma causes the tissue of the joint to break down forming small cysts, which then join to form a more obvious mass “THE GANGLION”… The most likely suggestion involves a flaw in the joint or tendon covering .

And so ends “Tuesdays Totally useless bit of Information” 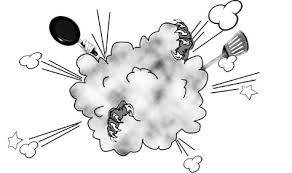 We make our friends; we make our enemies; but God makes our next-door neighbour.

The Bible tells us to love our neighbors, and also to love our enemies; probably because they are generally the same people.