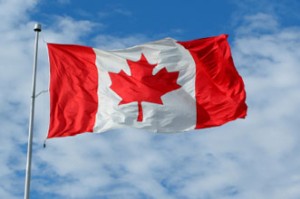 Canada Day occurs on July 1st, the anniversary of Canada’s confederation.  Canadians commemorate the day with parades, fireworks, cookouts, and concerts.  The popularity of the holiday has been on the incline since the late 1960’s and has since become a nationwide celebration.

Formerly known as “Dominion Day,” Canada Day marks the anniversary of the Constitution Act of 1867, joining Nova Scotia, New Brunswick, and the Canada province (now Ontario and Quebec) into a single country.  The Constitution Act  granted Canada a substantial amount of independence from England, although complete independence was not given until 1982.  Prior to 1900, there was little Canadian nationalism as many Canadians regarded themselves as British citizens.  The first official celebration was held in 1917 to honor Canada’s 50th birthday.

These are two versions of our national anthem.

Here is a little bit of “chezziness” :

Candada is home to the Crazy Canucks :D, we have two versions of our national Anthem, our Nation from the Atlantic Ocean to the Pacific Ocean  is 5,187 kilometres, and has an Area of 9,976,634 square kilometres, Ontario is where I live it’s a wonderful travel Destination :D, but most of all Canada is an Awesome place to live!!!!

and for your listening pleasure a little Stompin Tom Connors

For a super post on Canada …go and visit:

I found this little bit of information while “surfing the net” yesterday.

“All The Swans In England Are Property Of The Queen.”

Being the Queen of England comes with some perks 😉

The Queen has the power to call an election, declare war, awarding of honours and the dissolution of Parliament.

The Queen also owns all wild swans living in open water – only the species called ‘mute’ swans. Other species of swans, and those owned by individuals are not owned by Her Majesty.
It is also not treason to kill a wild swan and it does not carry the death penalty, which is what many believe.

The Title “Queen of England” has not existed for over 300 years – she is Queen of the United Kingdom of Great Britain and Northern Ireland.

There are 7 different species of Swan:

An unpopular book you believe should be a Best-Seller

He is also the  author of Nathaniel’s Nutmeg and many, many others.

Edward Trencom has stumbled through his life, relying on his trusty nose to turn the family cheese shop into the most popular in England. But his world is turned upside down when he finds a crate of family papers.  Things would never be the same.

Give it a try!