I found this and thought it was a great project for the start of the New Year!

I have affectionately called this “The Jar of Awesomeness” 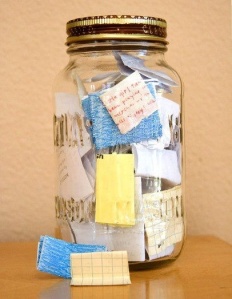 If you’re a crafter this is a really great website heart-2-home.com she’s got all kinds of stuff posted including a Diaper Wreath….recipes and more.

When the first period kids entered the room they discovered that there were no desks.

She replied, ‘You can’t have a desk until you tell me how you earn the right to sit at a desk.’

She told them, ‘No, it’s not even your behaviour.’

And so, they came and went, the first period, second period, third period. Still no desks in the classroom.

By early afternoon television news crews had started gathering in Ms.Cothren’s classroom to report about this crazy teacher who had taken all the desks out of her room.

The final period of the day came and as the puzzled students found seats on the floor of the deskless classroom, Martha Cothren said, ‘Throughout the day no one has been able to tell me just what he/she has done to earn the right to sit at the desks that are ordinarily found in this classroom. Now I am going to tell you.’

At this point, Martha Cothren went over to the door of her classroom and opened it.

Twenty-seven (27) War Veterans, all in uniforms, walked into that classroom, each one carrying a school desk. The Vets began placing the school desks in rows, and then they would walk over and stand alongside the wall. By the time the last soldier had set the final desk in place those kids started to understand, perhaps for the first time in their lives, just how the right to sit at those desks had been earned.

Martha said, ‘You didn’t earn the right to sit at these desks. These heroes did it for you. They placed the desks here for you. Now, it’s up to you to sit in them. It is your responsibility to learn, to be good students, to be good citizens. They paid the price so that you could have the freedom to get an education.

Don’t ever forget it.’

By the way, this is a true story.

Please consider passing this along so others won’t forget that the freedoms we have in this great country were earned by War Veterans..
LEST WE FORGET – WEAR A POPPY TO SHOW YOUR RESPECT ON REMEMBERANCE (VETERANS) DAY.
ON THE LEFT SIDE OF YOUR SHIRT ABOVE YOUR HEART- NEVER ON YOUR HAT OR ANYWHERE ELSE

The most incredibly Awesome Papizilla has nominated me for the Best Moment Award!!!

RULES of the Best Moment Award:

Winners re-post this completely with their acceptance speech. This could be written or video. Winners have the privilege of awarding the next awards! The re-post should include a NEW set of people/blogs worthy of the award; and, winners, notify them the great news!

“Awarding the people who live in the moment, The noble who write and capture the best in life, The bold who reminded us what really mattered – Savoring the experience of quality time.”

I am so thrilled to be nominated for this award.

I find myself extremely honored to be receiving such an important award The Best Moment Award, though I also must admit that somewhere deep inside, I saw it coming one day. 😀

I am earnestly grateful for the recognition I have received for my work. I have faced several challenges on my way here, but each has only strengthened me to make me the person I am today; a thorough professional pppffffttttt  who knows exactly what she wants chocolate and wine; someone who sets her eyes on a goal and does not take them off it unless it is achieved finishing a bowl of pasta in record time.

This award could not have been achieved without the inspiration I have received from my fellow bloggers, Check out my community for whom I have deep respect, and from whom I have derived the strength to challenge myself and write an awesome post 😀 😀

I sincerely thank every one of you however I’m running out of time and you all know who you are 😀   for helping me reach a stage where I can proudly hold up this award as a mark of my achievement. I also promise to only get better at my work so that you can see me here, hopefully for a different award next time.

Pheww how was that for a speech ?

So now what you’ve all been waiting for

Knocked over by a Feather

What I meant 2 Say

and I can’t forget to mention

I was on Pinterest last night when I came across this idea, might be a fun new tradition to start.

If you’re a crafter this is a really great website heart-2-home.com she’s got all kinds of stuff posted including a Diaper Wreath….recipies and more.

I’ve decided to call this project , The Jar of Awesomeness 🙂